Tens of thousands of Taiwanese audience cheered and applauded for glittering sparks and a jubilant dance as a golden dragon flew in the fire with bare-chested men dancing at the main site of the Nantou lantern show in Taiwan on the 13th day of the first lunar month. 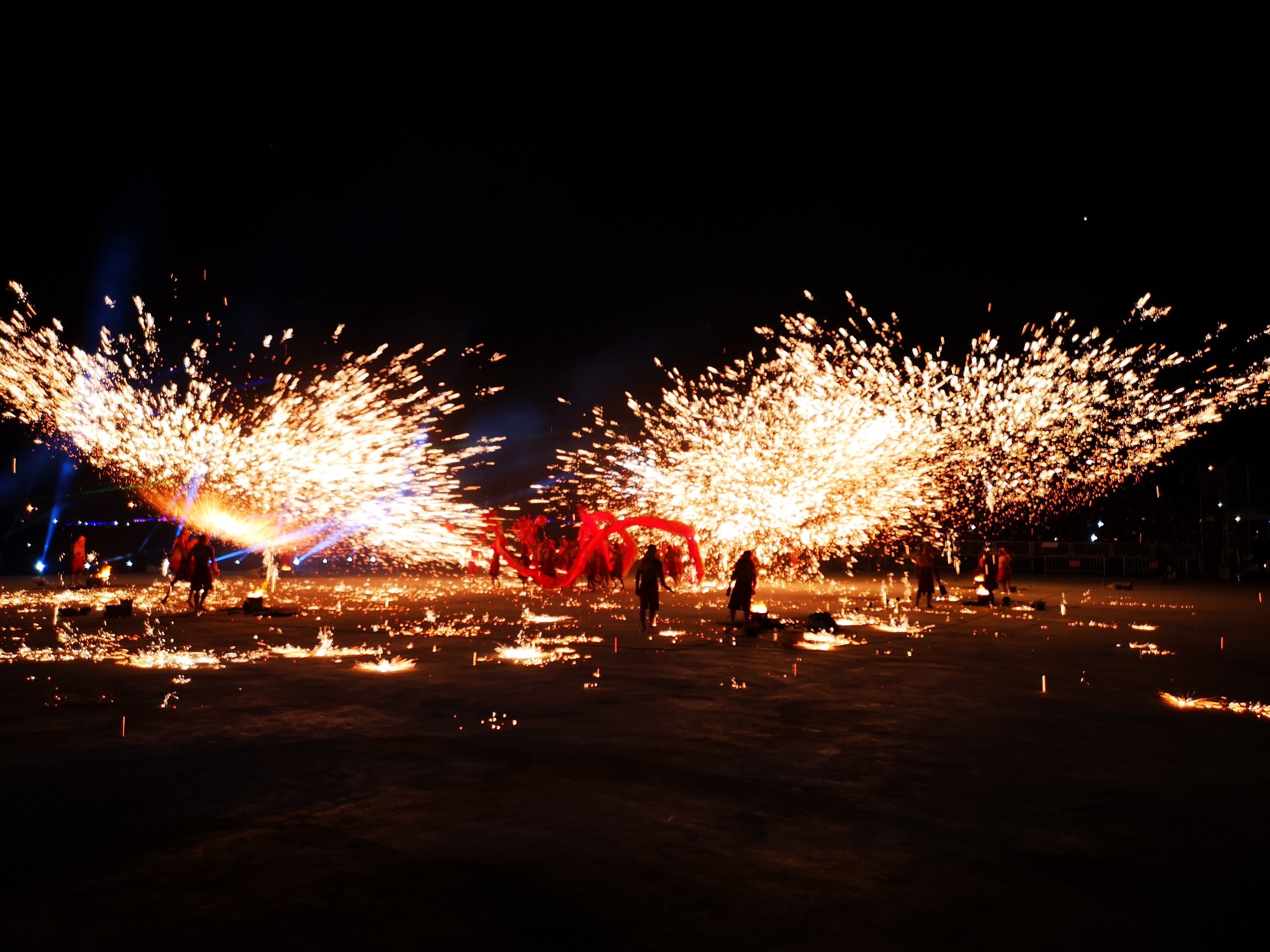 At Sunday night’s performance, eight fire-burning stoves were formed in a circle, and 16 bare-chested men sprinkled the special iron water into the air. The iron water molten by the heat of over 1,200 degrees Celsius flew into the sky, like a fairy scattering flowers. Held by other 20 shirtless men, two golden dragons with their bodies firing fireworks, flew up and down and shuttle back and forth in the sea of fire. Flame sparks and flashes illuminated the night sky of Nantou. 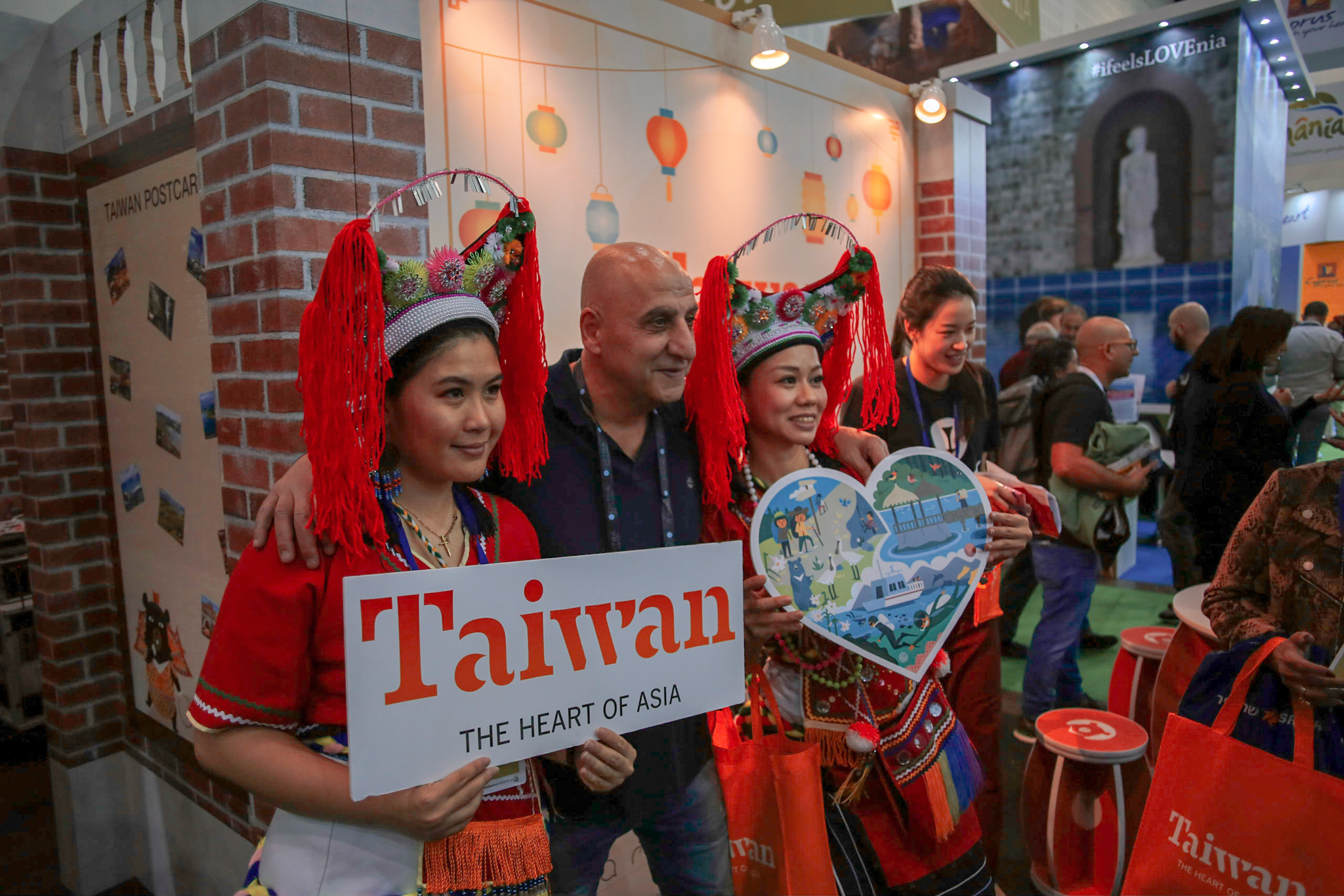 Li Shimin, a 68-year-old inheritor of the intangible cultural heritage Tongliang fire dragon dance, said that this was his third time to perform in Taiwan and he was excited at Taiwan compatriots’ enthusiasm. “I want to show the precious heritage left by the ancestors to Taiwan compatriots in an authentic manner. It will carry forward our dragon culture and deepen the friendship of the people on both sides of the strait,” Li added.

All the props and equipment including two fire dragons, eight stoves, and utensils such as pliers, coal and bamboo spoons were airlifted from Chongqing to Taiwan in order to present the original fire dragon performance to local people. The yellow mud used for stoves is also produced locally by Tongliang.

Different from previous years, this year’s fire dragon performance has been upgraded. The new performance not only sees its time extended from 9 minutes to 15 minutes, but also has the flag performance and the torch performance added to make the whole show more enjoyable.

Chongqing Tongliang fire dragon dance has a long history and is one of the first batch of national intangible cultural heritage masterpieces. The fire dragon uses molten iron water for sparks, supplemented by different fire at the mouth, the ridge, the belly, the field, etc., forming a spectacular three-dimensional fire array during the dance.

SOURCE The Publicity Department of Tongliang District of Chongqing City

The rise of street-haunting tourism
CL Hotels Acquires Coachman Hotel in South Lake Tahoe
Where and when to see cherry blossoms in Japan
Holidays Have Officially Begun at Walt Disney World Resort
World Travel Market London 2022, November 7 – 9, 2022, Exhibition Centre London
As Airline Issues Continue, How Does Travel Insurance Help?
How online travel platforms help to distribute tourism away from oversaturated hotspots
Costa Venezia Cruise Ship Arrives to Haifa Port
First-of-its-Kind New Rides to Open in Every SeaWorld Park in 2023 Including the World’s First Surf Coaster, the Longest and Fastest Straddle Coaster, and the World’s First Launched Flume Coaster
Winter beach destinations are once again becoming a popular choice for travelers
Miami has boomed over the course of the pandemic
Alternative guide to Mallorca
Dubrovnik’s spectacular old town
Saint-Malo, Brittany, has the highest tides in Europe
The cost of renting a London home on Airbnb has jumped on tourist demand
What makes French pastries so good?
View of Angers and the Maine river
Auray, Brittany, France
Five Top Tips for Safe Travel This Summer From International SOS
A local’s guide to Antwerp, Belgium
We use cookies on our website to give you the most relevant experience by remembering your preferences and repeat visits. By clicking “Accept”, you consent to the use of ALL the cookies.
Do not sell my personal information.
Cookie SettingsAccept
Manage consent