ARtGlass, the company leading the introduction of wearable augmented reality to large scale cultural tourism, today announced guided tours of Pompeii in which visitors wearing AR smartglasses will experience reconstructed sights and sounds of the ancient city layered over their real-world views of ruins. 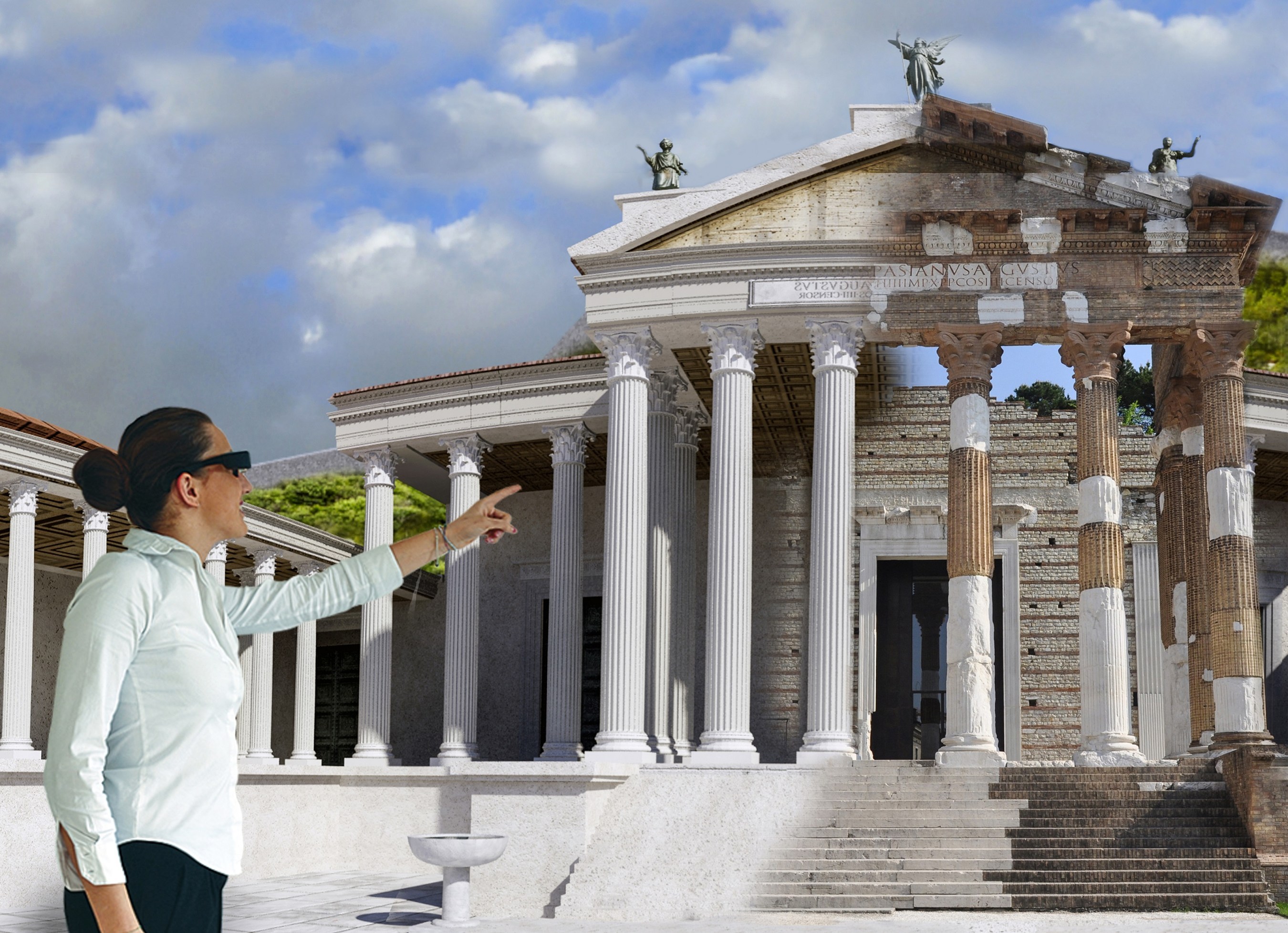 ARtGlass’s augmented reality tour layers a digital reconstruction of the Capitolium at Pompeii over the visitor’s real-world view of the ruin.

The announcement marks the latest in a string of ARtGlass deployments at iconic cultural sites in the U.S. and Europe, including George Washington’s Mount Vernon, Madame Tussauds, and the Royal Villa in Monza. While other AR companies have experimented with deploying wearable AR in short-term, smaller-scale museum exhibitions, ARtGlass is the first to embed the immersive experience in large sites’ year-round visitor offerings, and the first to create tours both indoors and out.

“We have learned so much from the first million people to enjoy ARtGlass experiences,” said ARtGlass CTO Luigi Percuoco. “There are vast differences between technology in the laboratory and in the hands of the public. We’re now able to reliably scale this magic to renowned sites like Pompeii.”

The Pompeii tour marks another first for the wearables industry: independent tour operators will offer the experience as part of their guided large group packages—the lifeblood of many sites. To date, ARtGlass has enabled visitors to individually prompt tour content just by looking at certain objects, without reliance on Wi-Fi or use of buttons. Now guides may transfer content to smartglasses worn by visitors in large groups simultaneously with the swipe of a finger.

Pompeii is a vast World Heritage site in southern Italy. Once a thriving and sophisticated Roman city, it was buried under yards of ash and pumice after the catastrophic eruption of Mount Vesuvius in 79 A.D. Its excavated ruins draw 3.6 million visitors annually. The ARtGlass tour, acting as a visual and auditory time-machine, reveals historically researched and highly detailed 3D reconstructions of buildings along Pompeii’s most popular tour route, including the quadrangle, theaters, domus, forum, and spa.

Handsfree 3D AR on smartglasses pushes the envelope of enhanced touring of museums and historic places far past 2D experiences on handheld devices like smartphones. As to what motivates sites to embrace the bolder wearable technology, ARtGlass CEO Greg Werkheiser says, “The more immersive the storytelling, the more people engage, the more they return. The tech is the means to the end, which is creating joyful appreciation of humanity and its achievements and struggles.”

ARtGlass’s proprietary software and systems operate across all smartglasses models. At Pompeii ARtGlass will use Epson’s Moverio smartglasses. Valerie Riffaud-Cangelosi, Epson Europe, commented: “We are pleased that our smartglasses are ARtGlass’s hardware of choice. Lightweight, easy to wear, and intuitive, the high-resolution display works well with ARtGlass software to recreate first century Pompei in vivid color and depth, offering visitors compelling insights into Roman culture and history.”

At today’s gathering of tour company executives at the site, councilor for productive activities of the town of Pompeii Salvatore Perillo remarked, “More of the glory of Pompeii before its destruction is now being revealed. It’s both educational and emotional.”

To learn more about ARtGlass, visit artglassgroup.com and view this video.

About ARtGlass – Headquartered in Richmond, Virginia, with offices in Milan, ARtGlass is the world’s first company to bring wearable AR at scale to mainstream tourism at arts and cultural institutions. The company’s early success is rooted in its team’s combination of leading-edge technologists, substantive specialists in art, archeology, architecture, and landscapes and entrepreneurs experienced in public engagement at historical, museum and cultural sites. ARtGlass co-founders Greg and Marion Werkheiser are also founders of Cultural Heritage Partners, the leading law, policy and business strategy firm serving the cultural heritage sector globally.

Thanksgiving travel trends revealed by online travel agent, eDreams
What is the concept of French bistro?
Is it safe to travel on a motorbike?
Inmarsat: Air Passengers’ Confidence Eight Times Higher Than a Year Ago, 83% Worldwide Now Happy to Fly
Get a Unique Travel Experience with FindGuide
How a wine trip to France helped me find my wine travel mojo
Costa Venezia Cruise Ship Arrives to Haifa Port
Paris is reclaiming its place atop Europe’s art scene
Celebrity Apex embarks in Haifa on Mediterranean cruise
How to travel light, with less luggage
Auray, Brittany, France
Alternative guide to Mallorca
Piles of lost bags in London, Paris and Toronto
The fifth bull run at Pamplona’s San Fermín Festival
A local’s guide to Antwerp, Belgium
The best places to eat outdoors in London
Birdwatching, hiking and hearty campfire cuisine with ex-FARC guerrillas in Colombia
Musée des Beaux-Arts de Bordeaux
Venice is the world’s first city to charge an entry fee
Saint-Malo, Brittany, has the highest tides in Europe
We use cookies on our website to give you the most relevant experience by remembering your preferences and repeat visits. By clicking “Accept”, you consent to the use of ALL the cookies.
Do not sell my personal information.
Cookie SettingsAccept
Manage consent