Het Scheepvaartmuseum (the National Maritime Museum) opened its new Main Gallery on 10 May with the impressive exhibition Republic at Sea. The exhibition explains how the Netherlands came to be a maritime nation, and tells the story of the Republic in the seventeenth and eighteenth centuries through more than 50 masterpieces. The Main Gallery is the new starting point for visits to the museum and highlights the strong connection between the maritime world and Dutch society over the centuries. The exhibition ties in with the museum’s new motto: ‘Water connects worlds’. 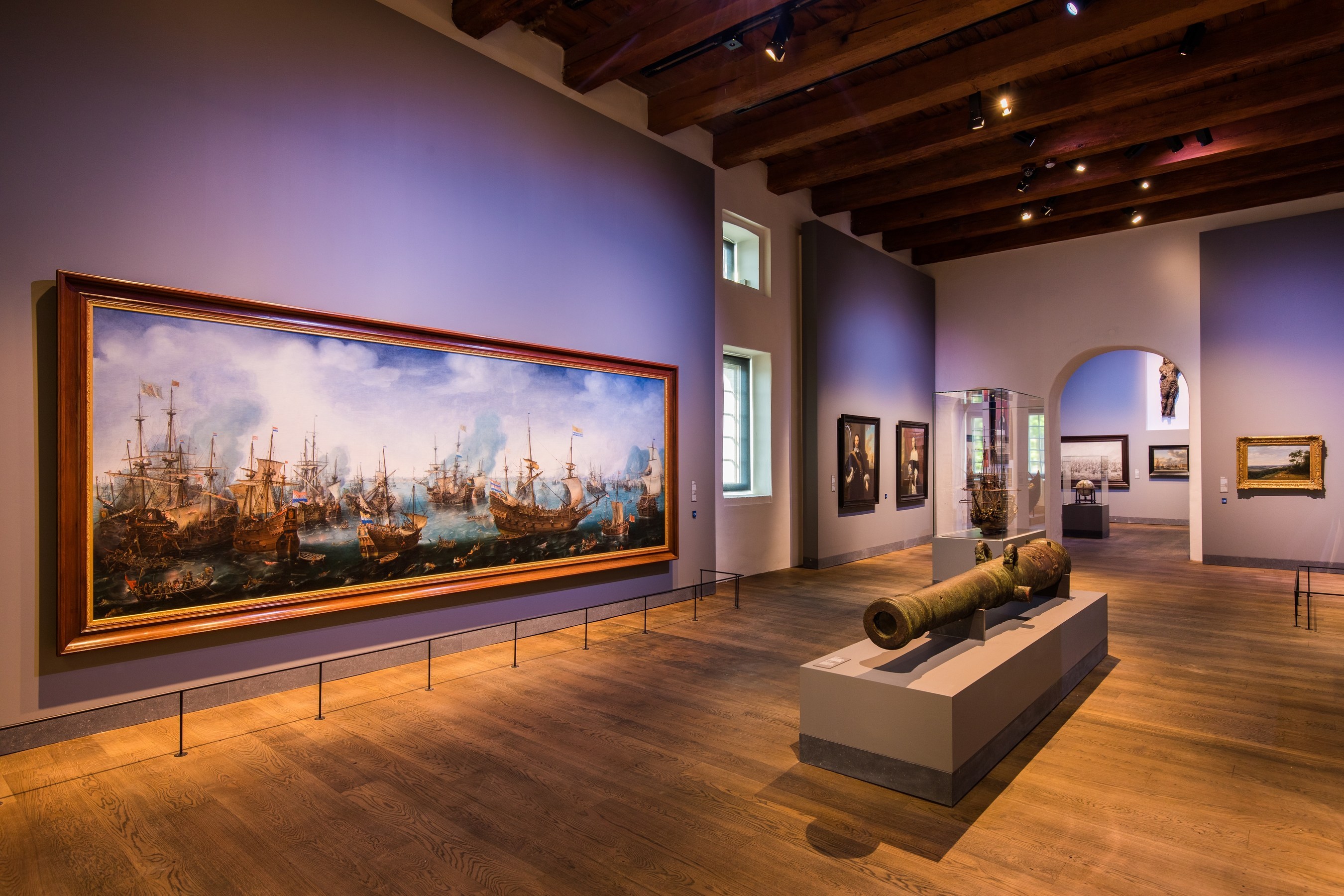 The exhibition Republic at Sea addresses the crucial role of water in the history of the Dutch Republic. The objects on display – which include paintings, other works of art, and tools – offer scope for new historical perspectives. They place an often-told story in a broader context, drawing attention to the uglier side of economic prosperity and cultural wealth too.

Many Dutch cities experienced great growth in the seventeenth century. Amsterdam developed into an important port with connections all over the world. While the nobility and the church still controlled almost everything elsewhere in Europe, it was the merchants who were pulling the strings in the Low Countries. They traded in every corner of the world, helping to increase their homelands’ prosperity. The wealthy and influential elite of Amsterdam loved to have distinguished-looking portraits painted of them. Two such important figures were Isaac Sweers and Constantia Bloemaert, whose portraits were painted in 1654. Isaac Sweers made a career for himself in the Dutch navy, and was eventually made a vice admiral. Constantia Bloemaert came from a prominent Antwerp family who had moved to Amsterdam and became active in the management of charities.

Global trade also led to the emergence of a maritime culture. Water played a big role in the lives of many inhabitants of the Dutch Republic. Merchants, admirals, and captains commissioned artists to produce paintings of their ships on distant shores or during successful naval battles. A new genre of painting emerged: marine art. The very wealthiest also took to the water for their own amusement. They would sail to their country houses in yachts, or take part in mock battles. An exquisite example of this is the painting Spiegelgevecht op het IJ (Mock battle on the IJ) by Abraham Storck (circa 1700). The largest object in the exhibition is a tent yacht from the Zaan region dating from 1760-80. Vessels like this allowed the wealthy to enjoy themselves on the inland waterways.

The uglier side of economic prosperity and cultural wealth

The great prosperity also had an uglier side. The ships of the Dutch East India Company and the Dutch West India Company literally had to fight their way to Asia and the Americas. The economic growth of the Dutch Republic came at the expense of the welfare of people elsewhere in the world and ultimately led to colonial oppression and the slave trade. The exhibition includes a porcelain figurine of an African man. This Chinese-made figurine was commissioned by a European (circa 1720). The figure features various elements typical of the Chinese style, such as the skirt and the lotus leaf, while the sun depicted on his forehead is a reference to the African continent. However, the golden collar around the figure’s neck is a clear European reference to slavery.

The latter years of the Republic

In the second half of the eighteenth century, the growth of the Dutch economy was slower than that in neighbouring countries. At the same time, the trade network remained in place for another two centuries. Developments in the sphere of international politics in particular had a negative impact on the Dutch Republic. The last section of the exhibition focuses on the declining years of the Republic. The exhibition concludes with a model of the Royal Barge, symbolizing the vision of the kingdom that came into being in 1813. The real Royal Barge, moored outside at the museum’s jetty, is a logical continuation of the exhibition Republic at Sea for visitors.

We couldn’t imagine life today without navigation systems and Google Maps. The vast amount of information and resources on Instagram, Pinterest, and Google puts the world at our fingertips. We can find out whatever we like with just a few taps or mouse clicks. But how could a seventeenth-century person learn about the world beyond their immediate surroundings, or even the world outside Europe? How did Dutch people imagine the world before their travels and had their views changed upon their return? What impressions did those who stayed behind gain of faraway places, and how did people bring the world into their homes? Het Scheepvaartmuseum proudly opened the exhibition Maps & Marvels on 10 May. This exhibition shows how Dutch seafarers navigated their way around the world from the seventeenth century onwards, and how their voyages coloured the European view of the world.

The exhibition Maps & Marvels presents the development of cartography and the encounters with new parts of the world. From the end of the sixteenth century onwards, Dutch sailors ventured further and further away from home. Their discoveries of unknown territories formed the basis for increasingly refined maps. The smallest details were included, and the beautiful illustrations make each map a work of art. Het Scheepvaartmuseum’s map collection is one of the world’s most prestigious collections, and tells us a lot about the voyages of the time and about the science of cartography. The centuries-old maps transport visitors to the locations that shaped Dutch history: South Africa, Indonesia, Japan, Australia, and Brazil. The spectacular wall map of Amsterdam by Pieter Bast dating from 1597 forms the starting point.

The second part of the exhibition looks at the so-called ‘cabinet of curiosities’: a treasure trove of eye-catching objects brought from far-off lands to Europe, literally bringing the unknown world into people’s homes. Objects such as coconuts and nautilus shells were very rare and were considered showpieces. They were so valuable that they were embellished with silver or gold. These naturalia – in which art and nature were intertwined – were favourites among collectors: was art surpassing nature, or did nature trump art? The beautiful collection of curiosities in this exhibition included a large number of objects from a private collection that have never been exhibited before.

Travel reports and ethnographic studies described the flora and fauna as well as the newly-discovered peoples and their customs. The depictions of the people encountered were generally stereotypes. These illustrations were used in art and to decorate beautiful objects and curiosities. A silver seal of the Dutch East India Company in the form of the bust of an African man is an example of the stereotypical and racist impression of black people. It shows the man with bared teeth, wide-open eyes, a turban, earrings, and a silver slave collar around his neck.

Het Scheepvaartmuseum shows how water connects worlds. The museum showcases a wide range of impressive masterpieces and artefacts from one of the world’s finest maritime collections. In addition to exhibitions with a historical character, the museum exhibits work by contemporary international artists and designers. The museum draws 350,000 visitors each year, putting it among the top five most popular educational days out in the Netherlands and making it a major attraction for both domestic and international tourism.

Images of the exhibition of Republic at Sea, Maps and Marvels and the exterior and interior of the museum can be downloaded here: https://www.hetscheepvaartmuseum.nl/node/1728

Holland America Line Takes Delivery of Highly Anticipated New Ship Rotterdam from Fincantieri
Exploration travel: Antarctica, Alaska, Galapagos, Iceland, and Norway
Why Sri Lanka is the perfect place for your post-pandemic travel therapy
Viking Ready To Welcome American Guests Back To Europe In Summer 2021
Britain is set to open up to visitors from more countries
CDC is still banning U.S. cruises
Steady recovery of tourism in Thailand
Deloitte: Leisure Travel to Take Off This Summer
The new travel startup that wants to plan trips around workcations
Mardi Gras, Carnival Cruise Line’s Newest and Most Innovative Ship, Departs On Maiden Voyage From Port Canaveral This Afternoon

Popular tourist destinations are facing a shortage of workers
Exploring the Charm of Tuscany: A Guide to the Best Towns and Villages
Leidos Deploys New Terminal Flight Management Capability at Cleveland Hopkins International Airport
Azulejos: the Portuguese ceramic tilework
Brescia and Bergamo
First-of-its-Kind New Rides to Open in Every SeaWorld Park in 2023 Including the World’s First Surf Coaster, the Longest and Fastest Straddle Coaster, and the World’s First Launched Flume Coaster
Winter adventures in the UK
London losing out tax-free shopping to Paris and Milan
Why do young people prefer to travel abroad?
World’s Most Punctual Airlines and Airports
Saint-Émilion, France
Piles of lost bags in London, Paris and Toronto
The cost of renting a London home on Airbnb has jumped on tourist demand
Taiwan Launches Virtual Event Showcasing Taiwan’s Family Travel Offerings with Appearances from Special Guests
Best Museums in London
The fifth bull run at Pamplona’s San Fermín Festival
Venice is the world’s first city to charge an entry fee
Best view of Melbourne? Ferguson Pier in Williamstown
Lufthansa is preparing another wave of flight cancellations
Most beautiful castles of Britain
We use cookies on our website to give you the most relevant experience by remembering your preferences and repeat visits. By clicking “Accept”, you consent to the use of ALL the cookies.
Do not sell my personal information.
Cookie SettingsAccept
Manage consent