Premiering Tuesday, May 12 on National Geographic, New Series KINGDOM OF THE MUMMIES Captures the Exclusive Behind-the-Scenes as Cameras Track the Multi-National Team of Archaeologists

National Geographic today released never-before-seen footage from within ancient Egypt’s first known fully intact funeral home. In conjunction with Egypt’s Ministry of Tourism and Antiquities, a team of archaeologists led by Dr. Ramadan Hussein from Germany’s Eberhard Karls University of Tübingen, uncovered the burial complex, dating back to 600 BC, deep beneath the sands at the Saqqara necropolis less than an hour’s drive south of Cairo. The new, four-part series KINGDOM OF THE MUMMIES produced for National Geographic by BBC Studios follows the team as they explore the subterranean chambers and open four sealed, 2,600 year-old sarcophagi to unlock secrets forgotten since the age of the Pharaohs.

Premiering Tuesday May 12 at 10/9c on National Geographic in the US before rolling out globally in 142 countries and 43 languages, KINGDOM OF THE MUMMIES tracks Dr. Hussein’s team, along with Egyptologist Prof. Salima Ikram from American University in Cairo, mummy expert Dr. Stephen Buckley from University of York, digital archaeologist Dr. Matthias Lang from University of Tübingen, geoengineer Dr. Ayman Hamed of Suez University and paleoradiologist Prof. Sahar Saleem from Cairo University, as they make a host of new finds and decipher clues about Egyptian burial processes. 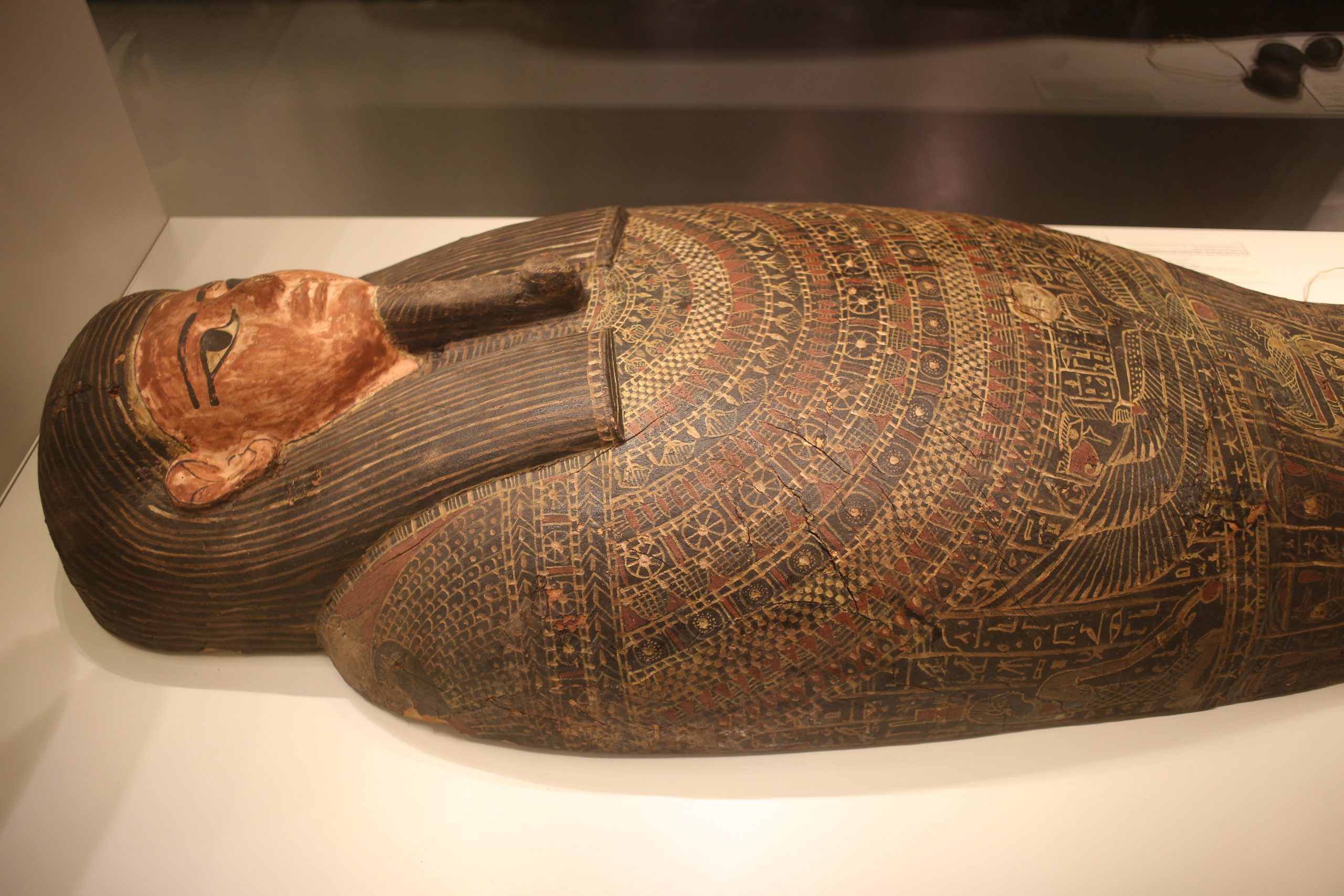 In addition to uncovering the first known fully integrated funeral complex with dedicated areas for organ removal, embalming and burial, the team’s learnings are helping reveal more about death – and the business of death – in ancient Egypt. The latest scientific testing and scanning of the tombs, their relics and the remains of the deceased also add layers of meaning and context to the lessons being gleaned about the sacred rites and commerce that were conducted in this subterranean space.

“The tomb contains mummies of both rich and poor people, as well as evidence of the funeral packages and quality of goods on offer. The evidence we uncovered shows the embalmers had very good business sense. They re-used chambers and re-sold sarcophagi to maximize the capacity of the complex,” said Dr. Hussein.

Peeling back layer upon layer hidden within the funeral home, other key finds included:

The first gilded silver mummy mask in Egypt since 1939. Only the third such mask to ever be found in Egypt, the exquisite craftsmanship and advanced metalworking technique that involves plating worked silver with a fine layer of gold, represented one step on the journey of the transformation of the dead into a god. In ancient Egypt silver was double the value of gold and non-invasive testing determined the silver’s purity at 99.07%, higher even than Sterling Silver at 92.5%;
The first mummy buried with an unprecedented six canopic jars holding organs, suggesting an entirely new form of burial. For thousands of years the standard number of these sacred vessels used to store the mummified organs of the dead was four, each guarded by a special god;
Evidence of a previously unknown cult worshipping a mysterious snake goddess exists via inscriptions on three mummies identify them as ‘Priests of Niut-Shaes’. While she is a previously unknown goddess, a symbol in her name says she took the form of a snake. Three priests indicates a dedicated sect rather than isolated worshippers;
Two elite priests buried in the shaft were of Libyan descent. In just a few generations of their families moving to Egypt these immigrants reached one of the highest ranks in Egyptian society, proof that ethnicity was no hurdle in multicultural Egypt where Greeks, Carians (from Southwest Asia), Phoenicians, Nubians and more existed side-by-side;
One mummy was entombed with crossed arms in a divine position usually reserved only for Pharaohs. While surveying the 3D scan of one mummy, ‘Ayawet,’ Dr. Hussein spots the rare crossed arms on his chest, suggesting he could have been a priest of high status;
And in a rare archaeological coincidence, two of the mummies might be mother and son, buried just 13 feet (4 metres) apart. A priest, ‘Tjanimit,’ named his mother, ‘Didi-Bastet’ on his sarcophagus, while a canopic jar in the opposite chamber is inscribed with the hieroglyphs for ‘Didi-Bastet’.
In order to reach the workshop 40 feet (12.5 metres) below the surface, Dr. Hussein and his team first had to remove 42 tons (38 metric tonnes) of packed sand from Shaft M 23-II. Their efforts revealed the purpose built chamber had strategically placed ventilation shafts and a large built-in incense burner that acted as an ancient air-conditioning and fumigation system, as well as drainage channels cut into the bedrock to funnel blood. Above ground, and 3 feet (1 metre) to the south of the workshop, they found two more facilities that were part of the funeral home including the 100 foot (30 metre) deep Shaft K 24 leading to six tombs containing a total of 54 mummies. At the base of this shaft, they located a tomb containing five burial chambers but, beyond the visible rooms, it took them another year to discover a hidden sixth burial chamber with more mummies behind a false stone wall.

In order to learn more about the contents of the tomb and those who worked and were buried there, the archaeological team used the latest technology to scan and capture as much data about the burial complex as possible, including:

A medical CT scanner created a 3D digital replica of the sacred canopic jars and their organic contents, a process that has only ever been performed on a handful of such jars;
Advanced chemical testing on the liquids and labels of hundreds of ancient pots in the workshop revealed the ingredients that made up the recipe for mummification. This called into question the meaning of the Egyptian word ‘entiyu’ (‘ntyw), which experts had long thought meant ‘myrrh’, but new findings by the team suggest this substance was actually made from cedar resin likely imported from modern day Lebanon;
Using a lightweight and mobile field kit to x-ray the mummies in their own 2,600 year old tombs allowed the fragile remains to be scanned with minimal damage;
And the digital archaeology team attached to the dig was one of very few using 3D scanning to create integrated models of underground areas. The data they captured will be used to create a virtual recreation so the tomb can be explored by anyone, even when its contents might have crumbled to dust.
KINGDOM OF THE MUMMIES is produced by BBC Studios for National Geographic. For BBC Studios, executive producers are Sarah Gibbs and Lisa Ausden. For National Geographic, the executive producer is Helen Hawken; Hamish Mykura is executive vice president, programming and development; and Geoff Daniels is executive vice president of global unscripted entertainment.

Exploring the Charm of Tuscany: A Guide to the Best Towns and Villages
Brescia and Bergamo
AIDAcosma, the LNG-powered cruise ship, arrives to Haifa Port
Revenge Tourism
Greyhound Providing Free Bus Tickets Home for Runaways this Holiday Season
Is chasing airline status worth it anymore?
September U.S. Travel Agency Air Ticket Sales Total $7.3 Billion
The Guggenheim Bilbao is a testament to the power of architecture, art, and culture to transform a city
Inmarsat: Air Passengers’ Confidence Eight Times Higher Than a Year Ago, 83% Worldwide Now Happy to Fly
WorldHotels™ Celebrates the Season With Bonus Points for Loyalty Program Members
View of Angers and the Maine river
A local’s guide to Antwerp, Belgium
The British Museum has the world’s largest collection of Benin bronzes
Five Top Tips for Safe Travel This Summer From International SOS
Rhapsody of the Seas on Mediterranean cruise
US cruise ships using Canada as a ‘toilet bowl’ for polluted waste
How to avoid looking like a tourist in France?
Saint-Émilion, France
The Loire is loved for its wines
Labyrinth pavement at Chartres Cathedral, France
We use cookies on our website to give you the most relevant experience by remembering your preferences and repeat visits. By clicking “Accept”, you consent to the use of ALL the cookies.
Do not sell my personal information.
Cookie SettingsAccept
Manage consent