In 2019, Japan recorded its highest number of foreign visitors , ending a ten-year growth period in the country’s tourism sector, with more international travelers using Japanese railways than ever before in the decade. Visitors are also increasingly choosing to travel with a JR Pass as the number of pass sales doubled during the year.

Japan’s tourism boom in 2019 in figures

The number of foreign visitors to Japan reached its highest level in 12 months, reaching 2.3 million in September 2019.
68,400 British tourists visited Japan in October 2019, enough to fill 51 Shinkansen trains during the peak period.
Japan ends the decade with its highest overall tourism statistics in the past ten years (more than 32.5 million foreign visitors).
In 2019, Japan welcomed 3% more train passengers compared to 2018, reaching 25.6 million rail passengers .
The number of JR Passes sold in 2019 doubled compared to the previous year, with 44% more American citizens buying a pass, as well as 8.5% more British travelers.
Japan carries 4.5 million more rail passengers per year than the German railways, despite 28,000 fewer rail routes.
The number of international travelers to Japan in September 2019 reached 2.3 million (an increase of 5.2% compared to 2018).
Japan’s revolutionary transportation plans for 2020 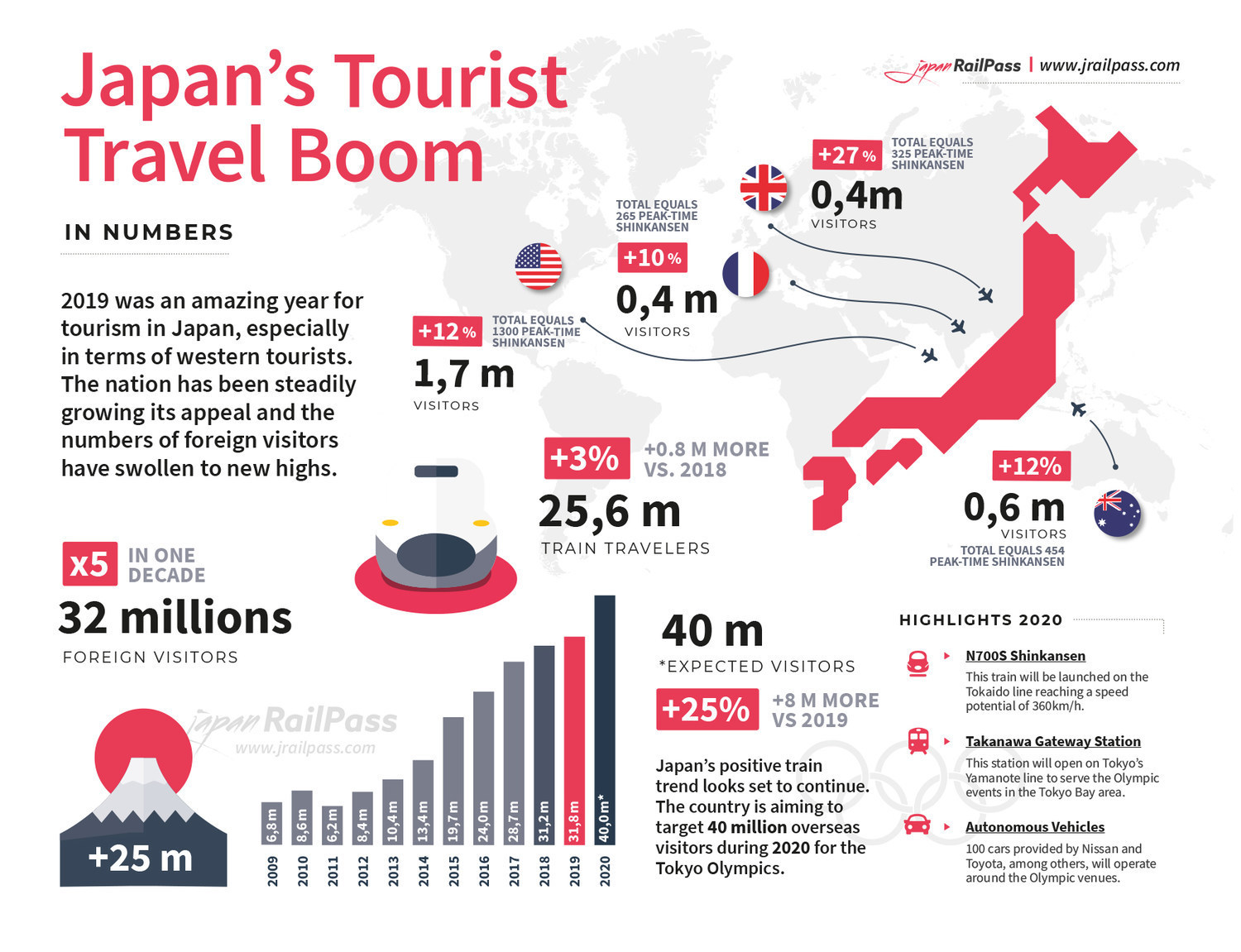 Japan aims to target 40 million foreign visitors in 2020, with a high number of vacationers scheduled for the Tokyo Olympics .

This year will also see the launch of the N700S Shinkansen trains on the Tokaido Shinkansen line between Tokyo and Osaka . The N700S class is the first improved Bullet type train to be introduced in 13 years and has the potential to reach speeds of 360 km / h.

The Tokyo Olympics will also host 100 autonomous vehicles , the operation of which is planned around the new station and the Olympic venues. These autonomous cars will be supplied by the national car manufacturers Nissan and Toyota.

About JRailpass.com: JRailpass.com is a private company not affiliated with any government service specializing in international sales. It offers a simple and user-friendly method of purchasing a JR card online before arriving in Japan.

Asia is home to the highest percentage of people who said they’ll “never travel” again
What is the concept of French bistro?
AIDAcosma, the LNG-powered cruise ship, arrives to Haifa Port
Small Cruise Ship M/V Clio Arrives to Haifa
Adventures by Disney to Debut Its First-Ever Adriatic Sea Expedition Cruise in 2024
Paris is reclaiming its place atop Europe’s art scene
Tripadvisor’s Year in Review: Unpacking all the good in 2022
NORWEGIAN CRUISE LINE TO ELIMINATE COVID-19 TESTING, MASKING AND VACCINATION REQUIREMENTS BEGINNING OCT. 4, 2022
Thanksgiving travel trends revealed by online travel agent, eDreams
SEABOURN CELEBRATES SEABOURN VENTURE’S MAIDEN VOYAGE TO ANTARCTICA AND NAMING OF ITS FIRST PURPOSE-BUILT EXPEDITION SHIP
Rhapsody of the Seas on Mediterranean cruise
Unique collection of classical statues is on display in Milan
Lufthansa is preparing another wave of flight cancellations
Taiwan Launches Virtual Event Showcasing Taiwan’s Family Travel Offerings with Appearances from Special Guests
What kind of ship would you choose to travel?
Best UK activity holidays and summer camps for teenagers
The cost of renting a London home on Airbnb has jumped on tourist demand
How to avoid looking like a tourist in France?
The Notre-Dame cathedral in Paris is on track to reopen in 2024
The best places to eat outdoors in London
We use cookies on our website to give you the most relevant experience by remembering your preferences and repeat visits. By clicking “Accept”, you consent to the use of ALL the cookies.
Do not sell my personal information.
Cookie SettingsAccept
Manage consent