YOKOHAMA, Japan, Feb. 09, 2020 – Phil and Gay Courter are in their fourth day of quarantine aboard the Diamond Princess and are continuing to request removal of all passengers to appropriate facilities or allow medical evacuation. The Diamond Princess is the site of the largest outbreak of the novel coronavirus outside of China (with 70 cases reported as of Sunday morning).

Officials continue to prevent passengers from disembarking but there is concern that:

The ship’s ventilation system is not designed to prevent transmission of the coronavirus.
The crew members (responsible for distributing meals to passengers in their quarters) are not trained in quarantine procedures and may also be incubating the virus.
Lack of appropriate sanitation may create other issues onboard.
The Courters are currently in good health but are increasingly worried about the future. “We are talking about our mortality and what our chances are of getting the virus,” said Gay Courter. “Our biggest fear right now, besides getting sick, is that we will be separated if one of us gets ill.”

The Courters can see ambulances waiting at the port but have no idea how many new cases have been officially reported and are concerned they are not being told everything. Captain Arma, whose leadership the Courters deeply admire, announced that the ambulances are not for new cases of the virus, but for other medical problems. Later, they learned there were six additional cases evacuated in addition to those with “unrelated illnesses.”

About Phil and Gay Courter – Gay Courter, 75, a best-selling novelist, and Phil Courter, 77, an award-winning documentary filmmaker, are currently quarantined about the Diamond Princess off the coast of Yokohama. Their balcony is positioned with a full view of the medical evacuations. 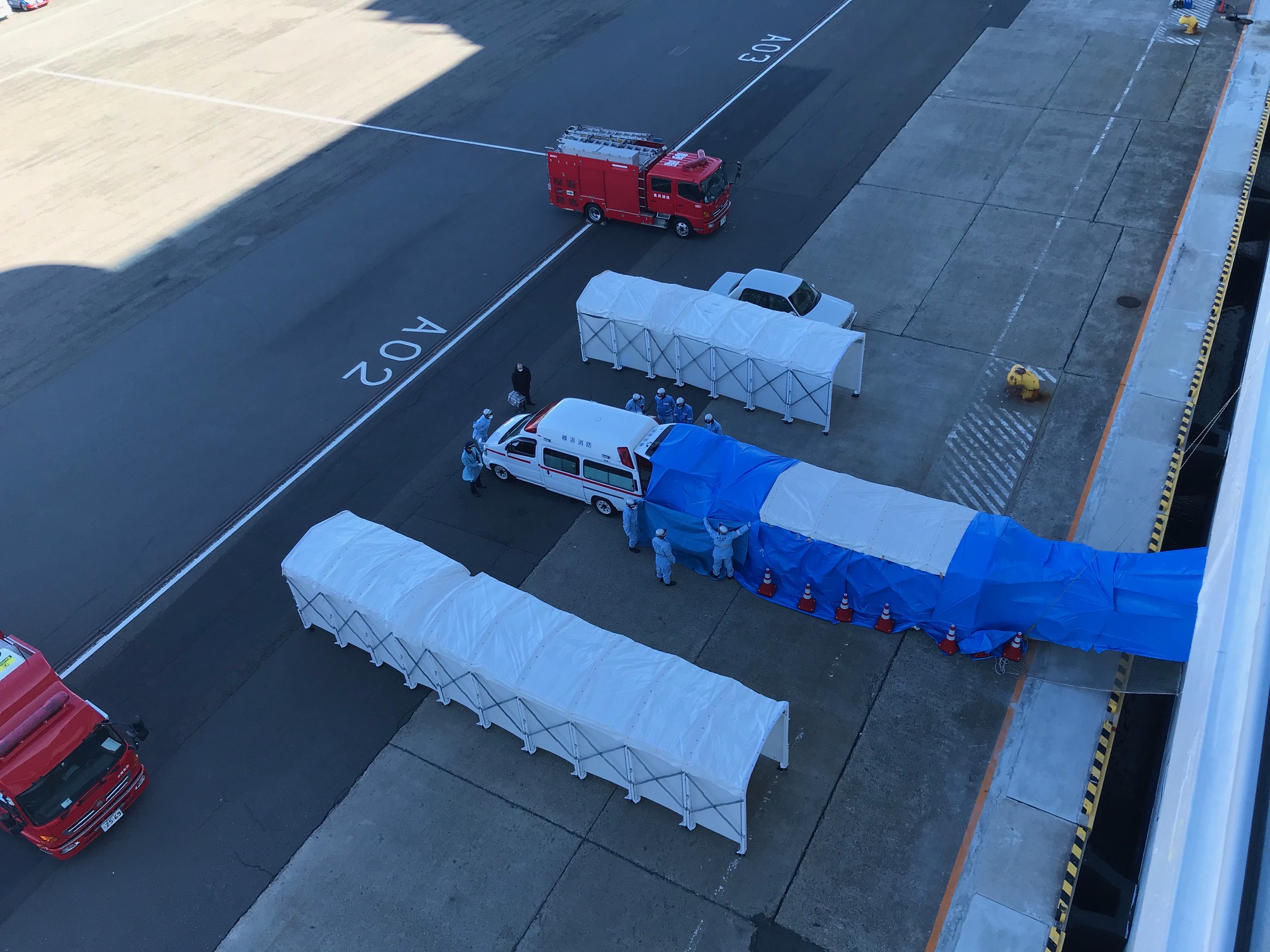 Pictures from today’s evacuation.
Captain Arma announcing the evacuations not related to coronavirus. (Audio)
Many photos of the cabin and port, including Gay in a mask.
Today’s ration of medical and protective supplies. (pictures)
Counting the days. (picture)

Tour of Ancient Rome
UK holiday costs more than Europe
Indonesia Expects to Welcome International Visitors in July 2021
Technology Eases up the Air Passenger Experience From Home to the Airport
Few industries in South Africa have suffered as much as tourism
IBM Consumer Study Points to Potential Recovery of Retail and Travel Industries, as Consumers Receive the COVID-19 Vaccine
Why Are Cruises So Popular?
Dubai named most popular destination of 2022 by Tripadvisor’s Travellers’ Choice Awards
Global hotel tech leader SiteMinder expands hotel commerce platform with acquisition of GuestJoy
Model of Jerusalem, with the Herod’s Temple in foreground, during the Second Temple period (circa first century CE), Israel Museum, Jerusalem

Cunard Announces 2024 Summer and Fall Program
How to overcome a fear of flying
Holidays Have Officially Begun at Walt Disney World Resort
NOW OPEN: Four Seasons Resort Tamarindo, México Welcomes Guests to a Verdant Refuge on the Pacific Coast
MSC Lirica, the cruise ship owned and operated by MSC Cruises, arrives to Haifa Port
Costa Venezia Cruise Ship Arrives to Haifa Port
Carnival Corporation Expands Next-Generation Wi-Fi Connectivity with SpaceX’s Starlink
First-of-its-Kind New Rides to Open in Every SeaWorld Park in 2023 Including the World’s First Surf Coaster, the Longest and Fastest Straddle Coaster, and the World’s First Launched Flume Coaster
As demand for air travel returns: decarbonization is the key for a more sustainable future
Island Princess, a cruise ship of Princess Cruises, arrives at dawn to Haifa Port
The Notre-Dame cathedral in Paris is on track to reopen in 2024
Musée des Beaux-Arts de Bordeaux
At the start of the year Rzeszow was the 15th-biggest city in Poland
View of Angers and the Maine river
Lufthansa is preparing another wave of flight cancellations
A local’s guide to Antwerp, Belgium
Almourol Castle, River Tagus, Portugal
Venice is the world’s first city to charge an entry fee
Best UK activity holidays and summer camps for teenagers
What kind of ship would you choose to travel?
We use cookies on our website to give you the most relevant experience by remembering your preferences and repeat visits. By clicking “Accept”, you consent to the use of ALL the cookies.
Do not sell my personal information.
Cookie SettingsAccept
Manage consent